The Move Head Node is used to control the head joint movement during the task. This node is different from all other nodes, because it keeps controlling the head movement after the execution has been completed, according to its “lock to”. 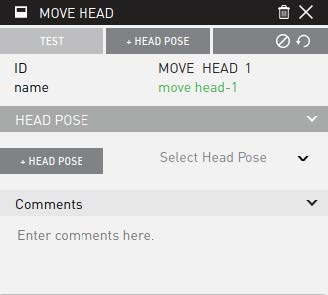 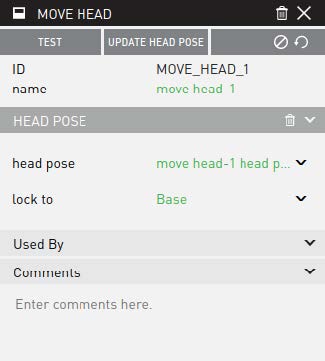 Update the head pose to the current pose of the head joint.

Dropdown menu - choose an head pose used by a different node. If you update the head pose from the referenced node, it will automatically update.

User should define what should be the head pose reference. Head will maintain the chosen lock until a different lock executed in the task

(Please note: when switching to a new reference head pose should be updated)

Base: The head pose reference will be the base, which means the head will maintain its objective position in the space. Whenever J0 will move, head joint will move to the opposite direction to keep turning toward the same place.

Arm - J0: The head pose reference will be J0, which means the head will rotate along with J0 and will keep the same difference from J0 angle.

Active Endpoint: The head will turn to the active endpoint regardless of its saved pose.

Lists other nodes where this head pose is used.