This page describes the Set To Node in detail.

The Set To Node is used to set the value of signals and variables.

Multiple signals can be set with a single Set Value node by clicking the + bar after the first variable has been chosen. To remove a variable after it's been set, just click to the right of the variable (if you hover your mouse over this area, the "remove item" tool tip will appear.

Values can be set to a user entered value or to the value of another signal or variable, as long as they are of the same type. 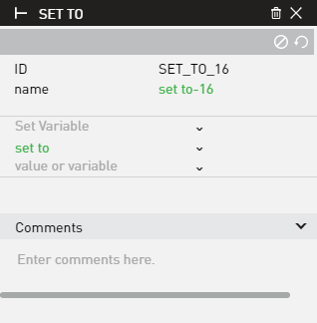 The variable or signal to be changed. Can be selected from the list or begin typing to search.

Value or variable to which to the above variable will be set. they must be of the same type.