This page provides a detailed overview about the priority node.

By default, a Priority Node runs its children in order, until one returns success, at which point the priority node will stop running and return success to it's parent. This means that none of the other child branches of the priority will be run on that loop. If all of the children have been given a chance to run and none have succeeded, the node will return failure to it's parent.

Suppose you have three testers and you want to service each tester when it is ready as indicated by a signal sent by the tester. This is easily handled by an instance of a Priority Node with 3 children, where each child is an instance of a Condition Node each testing the state of a signal associated with a different tester. Typically, the Priority Node will be a child of a Loop Node. The effect will be that each tester will be tested to see if it is ready to be serviced and if so, it will be serviced. If it isn’t ready to be serviced, it will be skipped until the next time through the loop. 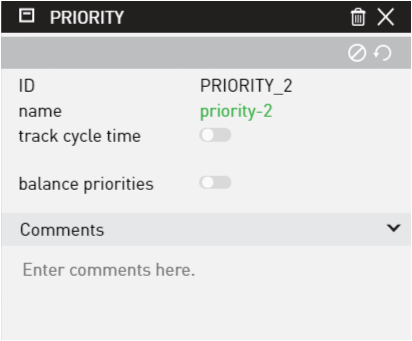 Determines the cycle time of how long it takes to execute the branch; the time it takes to complete all children contained within the Priority node. When turned on, it will create a variable for the specific Priority Node in Shared Data.

The Priority node is similar to a Sequence node, but can be used in situations where you want the robot to do only one of several options. It is especially useful when the balance priorities is enabled which means that each of the options is given equal opportunity to run. 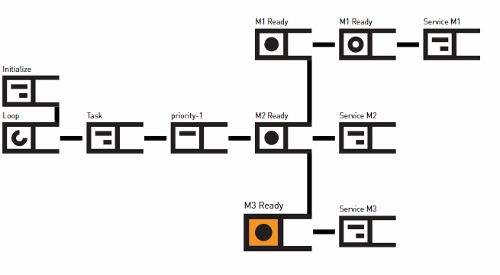