This page provides a detailed overview about the Loop Node. 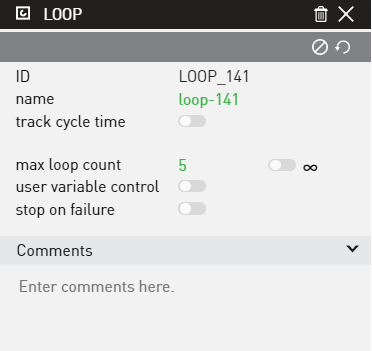 Specifies the maximum times the loop will loop. By default, set to 5. Select infinity by clicking the infinity switch. To use a variable to specify max loop count, see the user variable control property below.

If this is checked the user must specify a variable that will be used to specify the max loop count instead of entering a constant. The max loop count entry will change to a drop down list called user variable control. The variable must be an integer. Use this option when the number of loops must be controlled by some aspect of the task (number of locations in a pattern, for example).

By default this is set to false meaning that the loop will not stop if any of its children return failure. Set this to true if the loop should end if a child returns failure.

The nodes in the behavior tree are executed from left to right, top to bottom. The tree does not repeat itself (like the scan of ladder logic in a PLC), so a Loop node must be incorporated. It is included automatically when starting with a Basic Task. Most tasks will have only 1 loop node. A second loop node is most often added in parallel with the robot branch to execute logic like a PLC. It is possible to add another loop node, but it is important to limit the number of loops, or add a Do If with "keep evaluating" enabled so that the logic does not get stuck in that loop. 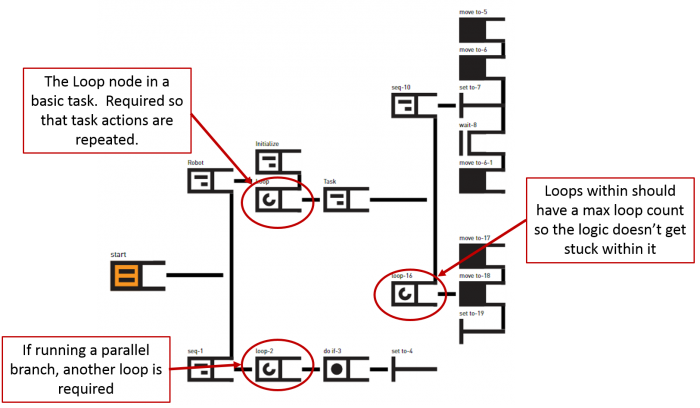