This page provides in-depth details about the Landmark Node. 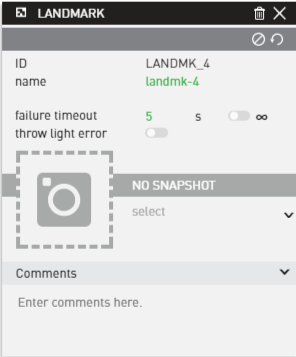 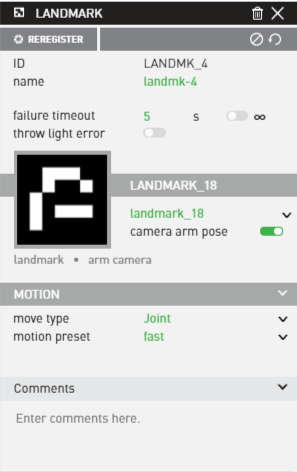 How long to wait for detection and re-registration to complete. If it doesn’t occur within that time frame, the node returns an error.

Turning on this option will trigger an error if the camera detects that the exposure of the landmark is too light or too dark. This is an error that can stop the task operation or be handled with task logic.

This menu gives the list of available snapshots from which to choose. Landmarks themselves are created and initially registered using the Snapshot Editor.

When enabled, this automatically creates an arm pose associated with the snapshot pose before searching for the Landmark. Disabling this allows the ability to create a separate Move To node before the Landmark node in the behavior tree.

Defines the motion type (joint or linear) to be used when moving the arm camera into the landmark detection pose.

Defines the arm speed to be used when moving the arm camera into the landmark detection pose.