This page provides a detailed overview about the Contact Node.

The Contact Node is used to train the robot to perform force behaviors. There are 2 main modes that can be trained. The first involves setting a specific stiffness for the joints in relation to the tool center point. The stiffness can be set to whatever frame of reference that the robot has been trained with. The Contact Node is also used to train the robot to push or pull with a specified amount of force.

The pose, frame and active endpoint are important when specifying a Contact Node.

Moves the arm to the pre-set arm pose (either live or in simulation). Cannot be used until a Arm Posed has been set.

Set the arm pose to the current pose of the robot (either live or sim, depending what mode you're in).

Name of the node. Auto Generated and User Editable.

Default off. Enables ability to specify a target duration for the Contact Move Node.

Number of times to retry moving to the set pose before returning an error.

Choose the tool center point from for the node.

If the 'use tcp from' is de-selected (greyed out), choose the appropriate force frame to move for this move.

For a specific axis, check "Torque Limit" to set a do not exceed limit for the force.

Dropdown menu - choose an arm posed used by a different node. If you update the arm pose from the referenced node, it will automatically update.

Name of the arm pose. Auto Generated and User Editable.

Lists other nodes where this arm pose is used.

Drop down menu - choose a parent for this node.

If marked green, will update all of the children with the chosen endpoint.

Lists other nodes where this Endpoint is used. 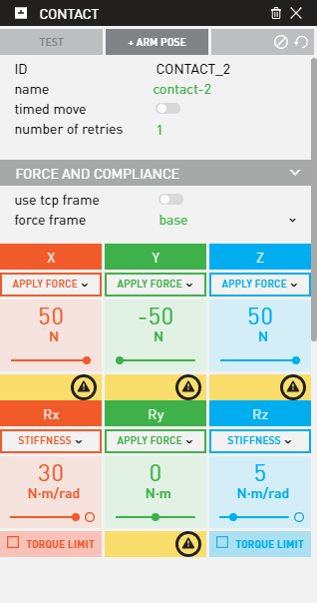 With the introduction of Intera 5, Sawyer is now capable of interacting with the physical world better than ever before. This will lead to more robust tasks and will also open up new tasks which may have been impossible with other robots in the past. This is all possible due to Sawyer’s hardware architecture and the introduction of CONTACT nodes in Intera 5. To learn more about what this is and the capabilities it opens, please read Intera 5 Force Features.

ATTENTION: It is important to understand how this node works in order to use it to its full capacity and not misuse it. Please read these points carefully before starting to explore the power of the CONTACT node.