This page provides a detailed overview about the Throw Error Node.

Intera will automatically throw a variety of low-level errors that it detects, such as errors associated with the physical state of the robot or devices, or errors encountered during moves. The Throw Error node is available to throw user-specified errors, such as if a mispick occurs. The error will only occur if the node becomes active. This type of error must be specifically defined by the user in the behavior tree. The Throw Error node is useful when it is possible for a task to get into a state in which user intervention is required for the task to proceed.

The Throw Error node is often used in conjunction with the Catch Error & Error Handler nodes. More information about the implementation of this node can be seen in the Error Handling tutorial. 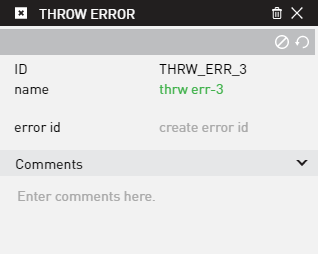 This is a string that uniquely identifies the error. It will appear under the Behavior Tree card within a selected Error Handler node.

Throwing an error will immediately stop the task. The task can be continued from its stopping point. Users are advised to properly manage any signals or variables which control the execution of the Throw Error node. In order to keep the task running, use Catch Error & Error Handler nodes. When an error is thrown, workspace snapshot can also be taken and saved to the task's snapshot gallery or sent to a configured email address.