This page provides a detailed tutorial of how to use the vision action nodes.

The first step in using the vision functionality is to train an snapshot. This means to define a surface on which the part will be located and move, and define the visual pattern which the robot will look for. It will use this visual pattern against which to compare the images in real time to determine if the object is present as well as its location and orientation.

Refer to the Vision page for the basic steps on how to train an snapshot. Some things to consider when training the snapshot:

Once the snapshot has been trained, a Vision Inspect or Vision Locate node in the behavior tree is required to use the vision features. 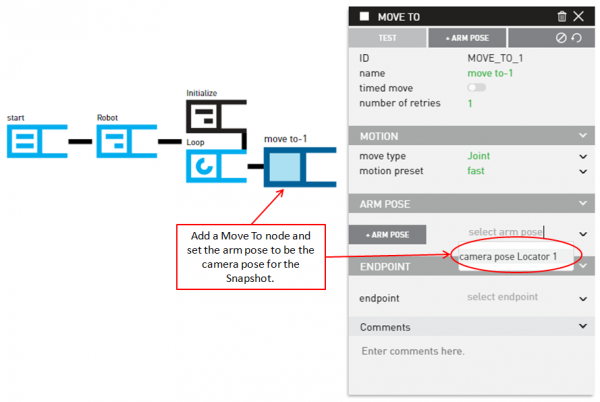 2. Open up the Node Inspector for the Move To node you just created and select the drop down menu next to the +Arm Pose button. Select the pose that is named "camera pose <Snapshot Name>". In this example, it is called "camera pose Locator 1". This will command the arm to move to the position where the object was trained. This is important because if the camera is at a different height or angle, the object will appear differently than when it was trained.

3. Next, insert a Vision Locate after the Move To node and select the Snapshot from the drop down list.

4. Open up the Node Editor for the Vision Locate node. Adjust the settings according to the needs of the specific application. For details on all of the parameters of the vision node, refer to the Vision Locate page.

5. Once all of the parameters have been set, press the TEST button, click GO TO and select RELOCATE to update the part location if it has moved since training the object. This is important because the poses trained after this point will rely on object frame.

6. Create the sequence that you would like for the robot to follow once an object has been detected. Below is a typical example of a vision pick. 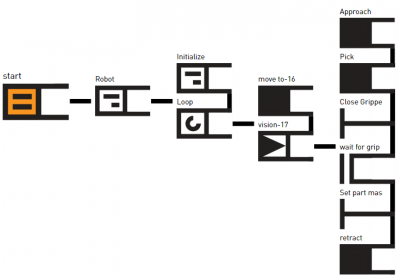 7. As the Move To nodes are added, make sure the part itself does not move. If the part moves, follow the instructions in Step 5 to reset the object frame.

The steps for creating a moving pick are very similar to a static pick. Train the snapshot in the same way, and create the same logic in the behavior tree. The differences are in the parameters of the vision locate node, and the Move To nodes.

Another use of the vision capabilities is for inspection by detecting the presence or absence of an object. Start the same way as creating a vision pick by training the snapshot. In this example, a dipstick on an engine is inspected.

1. Insert a Vision Inspect node into the task and select the snapshot from the drop down in the node editor. 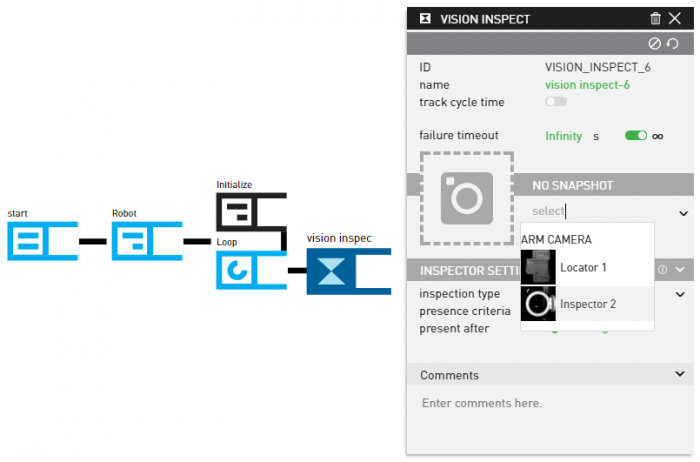 2. Create a variable to be used as a flag indicating whether the part is present or not. Make the default value false since the logic will set it to true when it is found.

4. Below the vision node, add a Do If which check the condition of the variable and if it is false, throws an error.

5. Be sure to put a Set To node before the Vision node so that it is reset on subsequent loops of the logic.

After inspecting we can go a step forward by sending an email when an object is not detected by Vision Inspect node:

6. Delete the throw error node from the behavior tree created in the previous section:

7. Add a Workspace Snapshot node as a child of the Do If node. 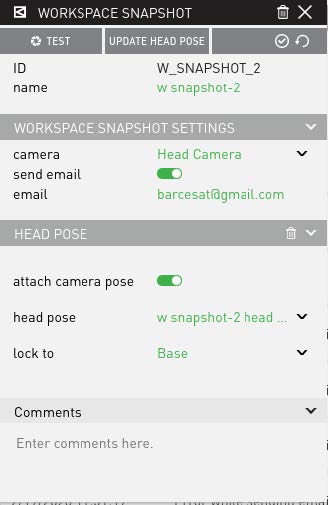