This page provides a detailed overview about the 3D View.

The 3D view of Intera Studio shows a model of Sawyer in the virtual work space. Similar to other Studio views, the Top Bar, Task Bar, Tool Bar, and Studio Menu appear on the Studio screen. Pressing the icon in the bottom right corner

The 3D view can be a useful tool when troubleshooting the behavior of a task. Follow the motion of the robot in the 3D view during task execution. Any moving frames will be represented in the 3D view while the task is running.

If the Live slider is activated

If the Live slider is not activated

, the robot model will appear gray and the 3D view Sawyer can be moved independently of the robot in real space. This mode acts as a simulation when executing a task.

If the Preview slider is activated

, when editing a Move To node the robot model will show its position in a transparent model.

Nodes and Frames in the 3D View

Several different frames will be shown in the 3D view at any point in time. For example, each Move To node has a frame which can be seen by selecting its dot in the 3D view. The active endpoint frame can be seen by clicking anywhere on the robot. These frames are defined by three colored arrows (red, blue, and green) which extend out from the center point of the frame.

The 3D view can be manipulated using the mouse. 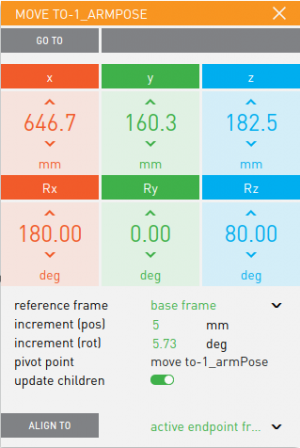 Pressing the icon on the bottom right corner

The Cartesian View is primarily used to increment the position (x, y, z) or rotation (Rx, Ry, Rz) of Sawyer by clicking the up or down arrow on the the respective axis. The default increment value is 5 mm. Additionally, a specific coordinate can be typed into Cartesian View to move the robot to the specified coordinates. Click on the respective axis and begin typing a valid number. The Cartesian View can be used to the move the robot in the work space, or to edit Move To Nodes already created in the task.

The pivot point identifies the selected item to orbit around, using the reference frame's axes and with Align To Sawyer’s position and rotation can now be aligned vertically in relation to any frame’s XY surface.

To actively jog (live) the robot in the work space, click the cursor anywhere on the Sawyer robot model in the 3D View. When the robot model is selected the Cartesian View title and the pivot point will state "Robot tool center point"

. The robot will move as you click on the Cartesian View arrows.

Jogging a Specific Move to Node Selected in the Behavior Tree

If a Move To node in selected in the Behavior Tree Editor the Cartesian View title will appear highlighted in orange and list the the name of the node, for example

. The pivot point will indicate which Move node that rotational jogs will be relative to. This will edit the position of the Move To node that is selected when jogging, changes are observed in the 3D view. The physical robot will not move while clicking the Cartesian View. In the event a Move To node was inadvertently edited while jogging, this may require an undo, update, or retrain the pose.

The arm can also be moved using the keyboard. Clicking the icon in the lower left corner of the screen

will show the hotkeys