This tutorial shows how to train more advanced patterns in Intera Studio, like nested patterns and user defined patterns.

How to Create a Nested Pattern

A nested pattern is a pattern within a pattern. This may be useful when packing things like bottles, because bottles may be packed tighter if the spaces between the bottles are filled with more bottles.

Take a look at the images below. The nested pattern is a combination of patterns A and B. This section of the tutorial will demonstrate how to create the behavior tree for a nested pattern.

In order to tell the robot which pattern to build three variables must be created.

1. To create a variable, click on the User Variables button in the Task Bar and then click on +Variable.

2. When creating a variable, it is important to give it a name that will help the user understand for what the variable will be used and how it will be used. In this case the NestedPattern variable will be of type Boolean (only two values: True or False) and the PatternCount variables will be Integer (only whole numbers: 0,1,2…). 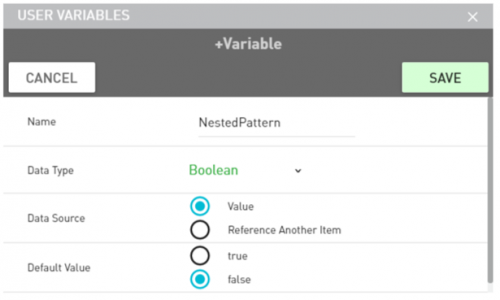 3. Now, create the outside pattern by following the steps on How To Create A Pattern. Once this has been completed, label it Pattern A. 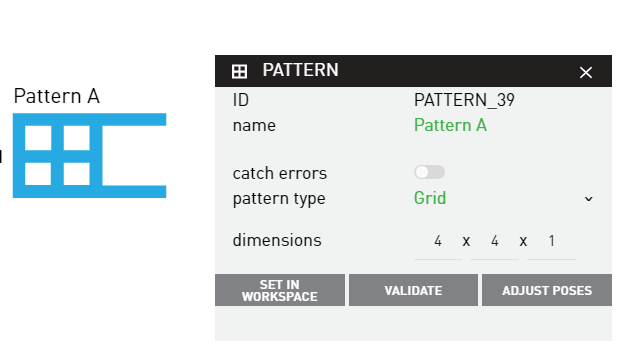 4. Make a couple of additions to the tree from the previous patterns example so that nested patterns will work.

The logic is as follows: every time the pattern sequence is executed, a counter is incremented. When the counter reaches a specific value, the robot will know to switch patterns and reset the counter. The additions are: 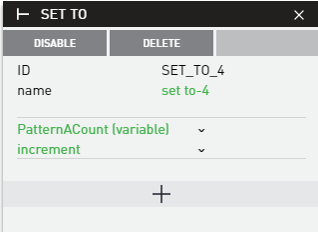 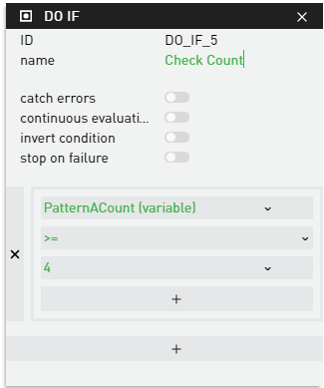 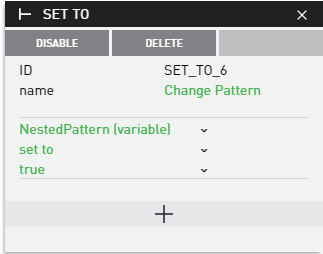 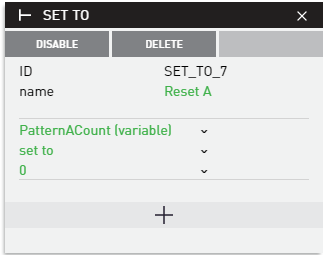 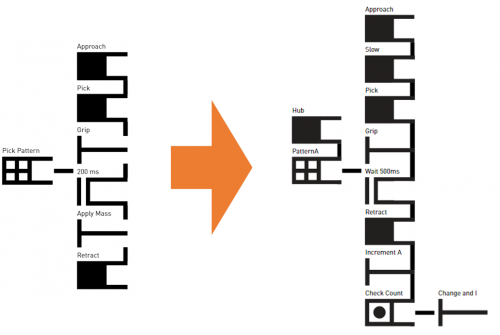 5. Now it’s time to create the inside pattern. Follow the steps for How To Create A Pattern. Make sure the variable set up are for Pattern B (i.e. PatternBCount instead of PatternACount in both the Increment and Reset Nodes). 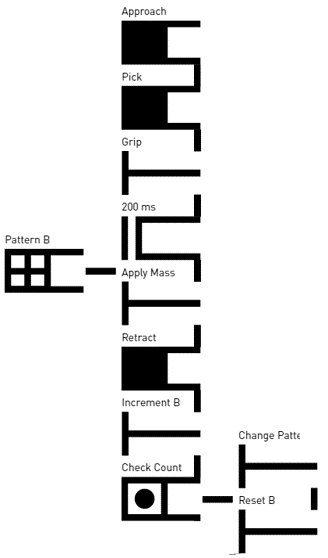 6. Use the 3D view to verify that the patterns are nested together. 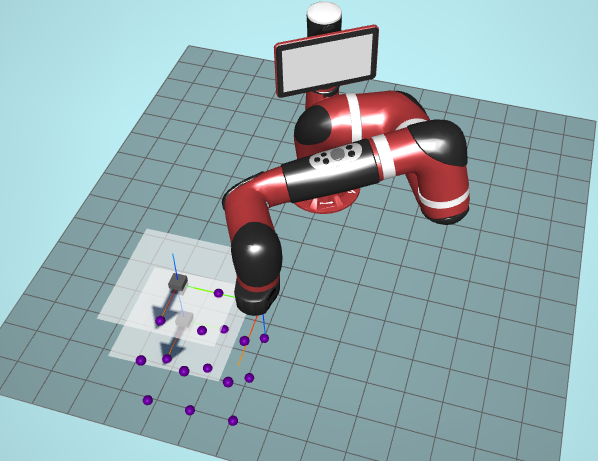 7. Add a condition node as a parent to each of the pattern nodes. 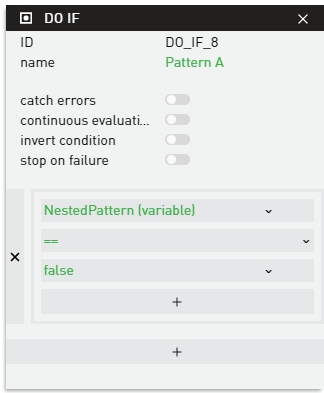 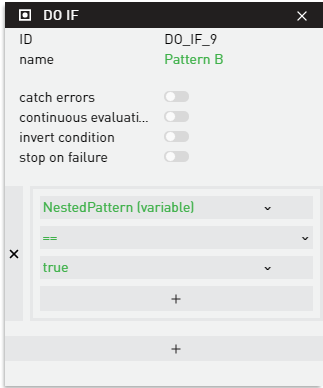 8. The last step is to initialize all variables at the beginning of the task. Add a SET TO node to the Initialize sequence and configure it as follows: 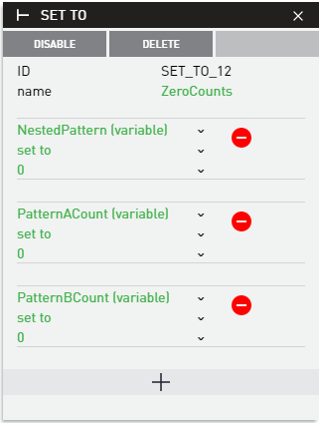 9. Use the picture below as a reference for how the tree should be structured.

How to Create a User Defined Pattern

A user defined pattern is helpful for repeating a sequence in which the iterations don’t follow a grid pattern, such as a circular pattern. This is also helpful when the orientation and location of points may vary but the sequence of actions is the same.

1. Position the arm at the first location. Click on the Frames button in the Task Bar to create new custom frames. For each location create a frame by clicking Add. 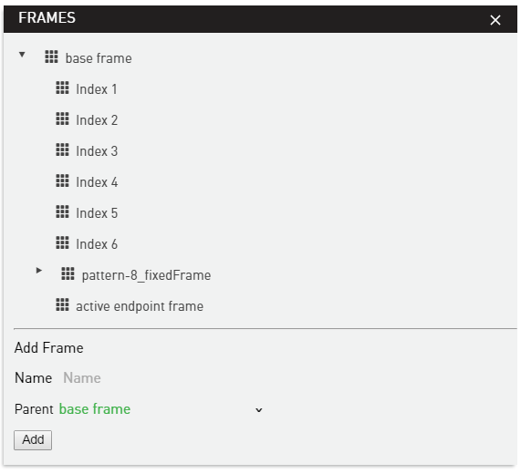 The frames will appear in the 3D view as shown below. 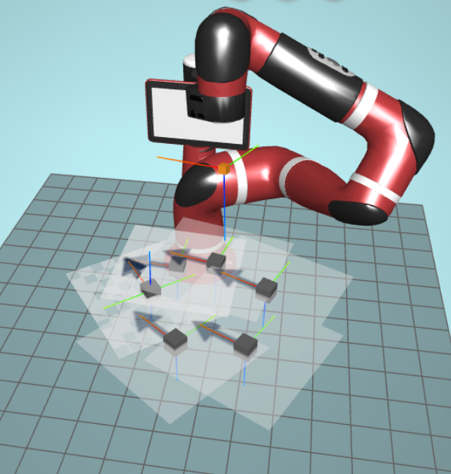 2. Once all of the frames have been created, go to the pattern node and create the sequence of actions which must be repeated. On the pattern node, select User Defined as the pattern type and start adding the custom frames in the Available Frames section. 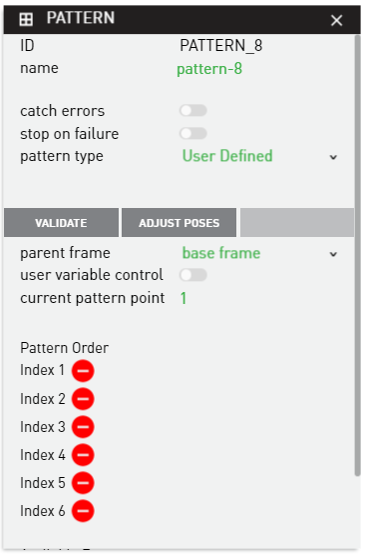 3. Train the Approach, Action, and Retract move to nodes as children of the pattern node. This step is similar to all of types of patterns.

4. Configure the remainder of the behavior tree as desired with the appropriate move to, set to, and wait nodes to create a pick or place. The user defined pattern has been set.